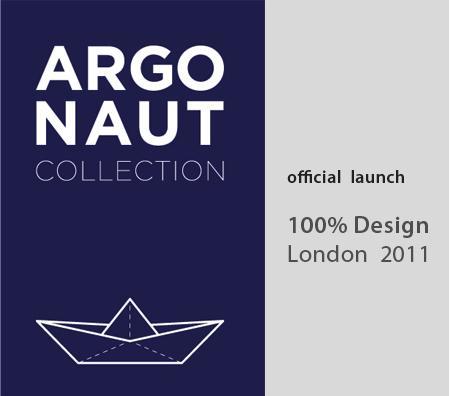 This year they decided to work together in order to create objects with clean but intense sculptural forms, with respect to the material’s qualities and an unconventional approach in the objects utility. The objective was also to collaborate with local but highly skilled crafts people and companies and together redefine the limits of design and craft.Christina Skouloudi Design Studio (www.skouloudi.com) and Athanasios Babalis (www.ababalis.com) are two independent creative design practices that focus mainly on furniture and product design.

The results are five objects that are designed and made in Greece but will travel through Europe and the rest of the world in a series of exhibitions in order to find distribution throughout the world. All the objects are made of various species of solid wood (or wood veneers) as it is one of the most kind materials to the environment.

The name “Argonaut” collection was inspired by the ancient Greek myth of the Argonauts. The Argonauts, went on a long journey to seek the “Golden Fleece”. Metaphorically, the modern Argonauts: the team of designers, makers and their work, are on a long journey in search for design excellence.

The Argonaut collection includes the following objects, named after the crew of the original myth:

More about the designers:

She has represented Greece at the Biennale of New Artists in Rome (1999) where she was awarded for her work as well as in an Arts competition by the Bank of Greece in 2007. She has also participated in many other exhibitions in Athens, Thessaloniki, London and Kortrijk.

In December 2009 she set up her own studio, called “Christina Skouloudi design studio” where she launched her own series of products, made in Greece.For more information visit www.skouloudi.com

He studied Industrial Design at the London Metropolitan University and the Royal College of Art in London.

His professional career started in London (as a freelance furniture designer) and continued in New York where he worked for seven years for companies like Dimensional Media Associates Inc. and Dakota Jackson Inc. as a product designer.

In 2003 he returned to Thessaloniki, Greece where he established his own design studio.

In 2006 he was elected Professor of Industrial Design at the Technological Educational Institute of Larisa, Greece.